Tour Price: Price will vary depending on no. of people, types of activities as per guest's interests, preferences and tastes. Please send your tour queries to hello@crimsonasia.my and we will give you a quote.

Bhutan often referred to as ‘Land of the Thunder Dragon’ or ‘the last Shangri La’ on earth, is situated in the lap of Eastern Himalayas between India and the People's Republic of China. Covering an area of 38,394 sq km, the tiny Himalayan Kingdom is one of the most isolated nations in the world. Spectacular mountain terrain, varied flora and fauna, ancient Bhutan Buddhist monasteries, and magnificent landscape of Bhutan have made it an exemplary tourist destination. Bhutan is bestowed with rich bio-diversity harboring around 300 medicinal herbs and 165 endangered species. Each part of Bhutan has its own historical, geographical, cultural, traditional and religious significance.

With its beautiful and largely unspoiled Himalayan setting, its rich flora and fauna and its vibrant Buddhist culture, Bhutan really is an idyllic place to visit.

The flight to Paro is one of the most spectacular in entire Himalayas. Flying along the Himalayan range from Kathmandu, the journey offers fascinating views and an exciting descent into the Kingdom. Bhutan’s first gift to you as you disembark from the aircraft will be cool, clean fresh mountain air.

After immigration formalities and baggage collection, you will be met by our representative, and afterwards drive to Thimphu, the capital town of Bhutan with en-route stop at Chuzom, the confluence of Thimphu and Paro rivers. Three different styles of stupas; Tibetan, Nepalese and Bhutanese adorn this confluence.

On arrival in Thimphu, check into hotel.

The capital town of Bhutan and the centre of government, religion and commerce, Thimphu is a unique city with unusual mixture of modern development alongside ancient traditions. Although not what one expects from a capital city, Thimphu is still a fitting and lively place. Home to civil servants, expatriates and monk body, Thimphu maintains a strong national character in its architectural style.

In the afternoon, take a short drive to the north of town to Buddha Point (Kuensel Phodrang). Located at a short drive from Thimphu city centre, visitors can get a good overview of the Thimphu valley from the Buddha point (Kuensel Phodrang). You can pay your obeisance and offer prayers to the Buddha, the largest statue in the country and then walk around and take a glimpse of the valley.

Followed by visit of King’s Memorial Chorten which is continuously circumambulated by people, murmuring mantras and spinning their prayer wheels. Construction of this landmark was the idea of Bhutan’s third king, His Majesty Jigme Dorji Wangchuk (“the father of modern Bhutan”) who has wished to erect monument to world peace and prosperity. Completed in 1974 after his untimely death, it serves both as a memorial to the Late King and as a monument to peace.

On the way back, take an evening stroll through the Craft Bazar recently established under patronage of Department of Cottage & Small Industry and in collaboration with the Department of Culture, Tourism Council and the Department of Agriculture Marketing and Cooperatives, this market offers genuine Bhutanese arts & crafts thus contributing in promotion, protection and preservation of traditional arts and the main town of Thimphu.

Dinner and overnight at the hotel in Thimphu (Altitude 2400m).

After breakfast, enjoy a dramatic drive over the high mountain pass of Dochu La (3,080m) and on to Phobjikha Valley, passing through dense forests and oak, rhododendron trees. The journey continues over the 3,050m mountain pass where on a clear day, the towering Himalayan peaks are clearly visible. The highway follows the scenic Dang Chhu before climbing through forests of bamboo and oak.

In the afternoon, take a walk around Gangtey village and visit Gangtey Gompa, the only Nyingmapa monastery in this region.  The village of Phobjikha lies a few kilometres down from the monastery, on the valley floor. This quiet, remote valley is the winter home of black necked cranes, which migrate from the arid plains of Tibet in the north, to pass the winter months in a milder climate.

Overnight at hotel in Gangtey. 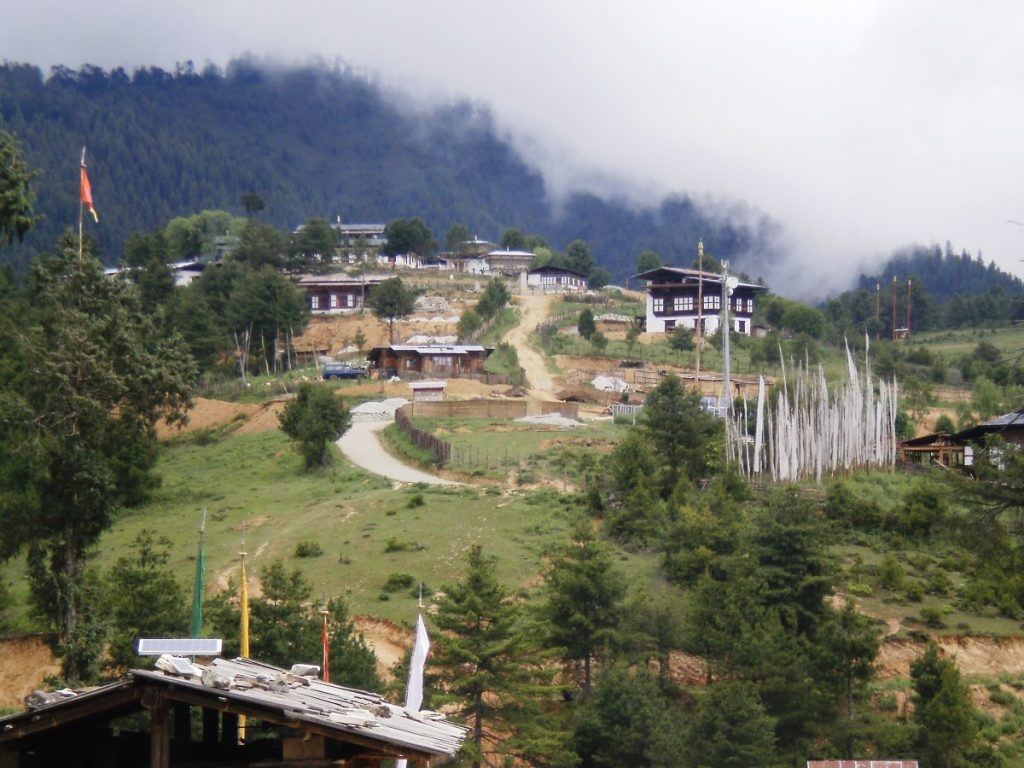 The valley of Gangtey is one of the most beautiful spots in Bhutan. The surprise of finding such a wide, flat valley without any trees after the hard climb through dense forests is augmented by an impression of vast space, and extremely rare experience in Bhutan where most of the valleys are tightly enclosed.

Get up early in the morning to take part in the Morning Prayers at Gangtey Monastery. Watch the group of young and old monks deeply engrossed in chanting Buddhist Mantra. A one-hour prayer session is followed by daily monastic chores. You are most welcome to take a look around the monastery to experience the everyday life of monks deeply rooted in Buddhist philosophy.

Participate in fire ceremony (or fumigation) - it is a common belief that every place has its local protective deity or spirit. To please this spirit and keep the spirit happy, the Bhutanese fumigate every morning and during special religious ceremonies. It is also a ritual for self-cleansing of all bad spirits surrounding us, and to be blessed with good luck. Fumigation involves the burning of selected herbs in a fumigation stupa located at monastery premises.

Explore Phobjikha Valley for Black Necked Cranes. (in winter only, Oct to mid-March), or visit Black Necked Crane Information Centre. Situated on the edge of the forest and wetlands along the main road of Phobjikha valley, the Black-Necked Crane Information Centre has an observation room equipped with high power telescope and spotting scopes for catching the best view of the cranes. The centre also offers display information that outlines the natural and cultural history of the area. There is a small gift shop, which sells handicrafts produced by the local people.

Overnight at the hotel in Gangtey.

After breakfast, drive to Bumthang, crossing Pele-La pass (3300m/10830 ft) via Trongsa - the Pela La (pass) is marked by a large white chorten prayer flags. There is an abrupt change in vegetation at this point, with mountain forest replaced by high altitude dwarf bamboo trees.

Overnight at the lodge in Bumthang.

After breakfast, proceed for the tour of Bumthang Valley.

Bumthang is the general name given to combination of four valleys – Chumey, Choekhor, Tang and Ura with altitude varying from 2,600m to 4,000m. It is home to many of prominent Buddhist temples and monasteries.

Visit Kurje Lhakhang, where the saint Padmasambhava subdued a local demon and left his body imprinted on a rock, the Jambey Lhakhang (7th century temple), Tamshing Lhakhang (housing some of the oldest wall paintings in Bhutan) and Jakar Dzong (administrative center of the region). Take a stroll in the village and visit the little handicrafts shops at the entrance to the town.

In the afternoon, take a short hike to Lhodrak Kharchhu Monastery. Located above the main town, about 3 km from Chamkhar town, the monastery was founded by Namkhai Nyingpo Rinpoche in 1984 who was recognized at a very young age by H.H. the 14th Dalai Lama and H.H. 16th Karmapa as the reincarnation of a Tibetan Lama.

The monastery has become part of an extensive effort to preserve and revitalize Tibetan culture. The monks’ regular curriculum include reading, memorizing the daily prayers, learning dharma dances, drawing mandalas, learning the melodies of sacred rituals, learning the use of ceremonial instruments and the art of making sacrificial objects, poetry, karika along with the basics of contemplation and instruction on the different stages of tantra.

Overnight at the lodge in Bumthang.

After early breakfast, drive to the airport for flight to Paro.

The beautiful valley of Paro encapsulates within itself a rich culture, scenic beauty and hundreds of myths and legends. It is home to many of Bhutan's oldest temples and monasteries, the national museum and the country's only airport. Mount Chomolhari (7,314m) reigns in white glory at the northern end of the valley and its glacial water plunge through deep gorges to form Pa Chhu (Paro river). Paro is also one of the most fertile valleys in the Kingdom, producing a bulk of the locally famous red rice from its terraced fields.

Stop at Dochu la Pass for a short break and to freshen up.

On arrival check in to hotel, followed by lunch.

Your first visit in Paro will be Ta Dzong.  Once a watchtower, built to defend Rinpung Dzong during inter-valley wars of the 17th century, Ta Dzong was inaugurated as Bhutan's National Museum in 1968.  Today it holds a fascinating collection of art, relics, religious Thangkha paintings and Bhutan's exquisite postage stamps. The museums circular shape enhances its varied collections displayed over several floors.

Drive to visit Rinpung Dzong, which has a long and fascinating history. Built in 1646 by Shabdrung Ngawang Namgyal, the first spiritual and temporal ruler of Bhutan, the Dzong houses the monastic body of Paro, the office of the Dzongda (district administrative head) and Thrimpon (judge) of Paro district. The approach to the Dzong is through a traditional covered bridge called Nemi Zam. A walk through the bridge, over a stone inlaid path, offers a good view of the architectural wonder of the Dzong.

Overnight at the hotel in Paro.

After breakfast drive to Thimphu. Upon arrival visit Pangri Zampa, 16th century monastery in Bhutan located just north of Thimphu. Here is a monastic school where Buddhist students’ monks learn Lamaism and astrology based on Buddhist philosophy. Guests can interact with monks.

Spend a meaningful afternoon at Drubthob Goema / Zilukha Nunnery. It is the only nunnery in the capital known as Zilukha Anim Dratsang, once belonged to the Drubthob (Realized one) Thang Thong Gyalpo often referred to as The King of the Open Field (In the early 15th century with his multiple talents he popularly became the Leonardo da Vinci of the Great Himalayas). You may interact here with some of the nuns who have devoted their life to spirituality and Buddhism.

Dinner and overnight at the hotel in Paro.

On arrival at trail-head point, embark on a walking excursion to Taktshang Monastery. It is one of the most famous of Bhutan’s monasteries, perched on the side of a cliff 900m above the Paro Valley floor. It is said that Guru Rinpoche arrived here on the back of a tigress and meditated at this monastery and hence it is called ‘Tiger’s Nest’.

This site has been recognised as a most sacred place and visited by Shabdrung Ngawang Namgyal in 1646, and is now visited by all Bhutanese at least once in their lifetime. On 19 April 1998, a fire severely damaged the main structure of building but now this Bhutanese jewel has been restored to its original splendour.

Afternoon at leisure for personal activities / exploring the charming traditional architecture town in Paro, along with some shopping opportunities.

Overnight at the hotel in Paro. 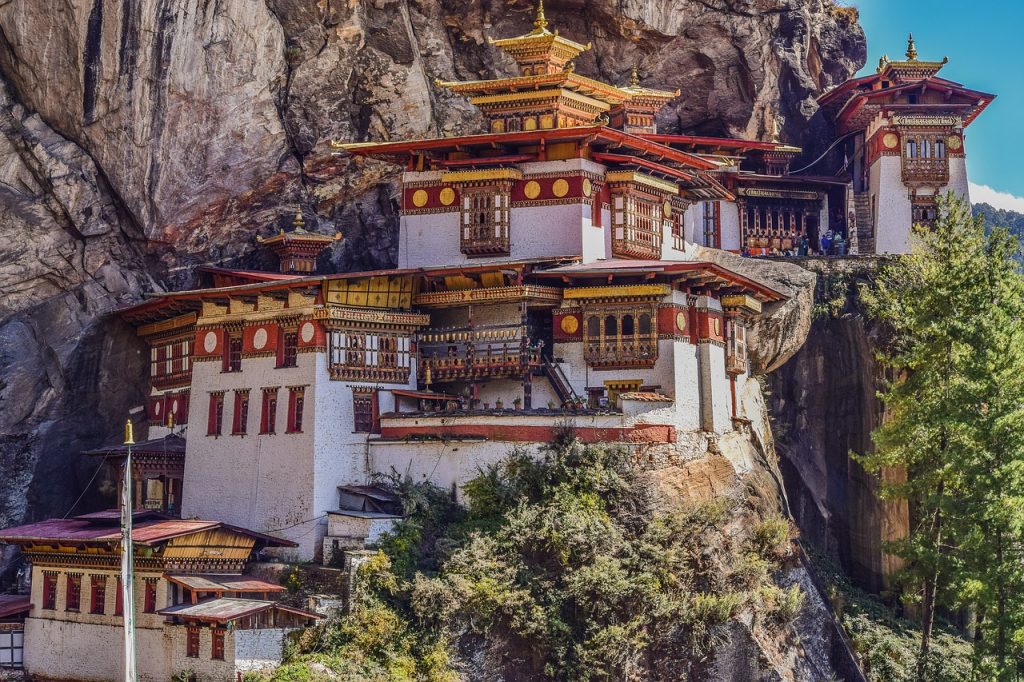 After early breakfast at the hotel, drive to the airport for flight to your onward destination. Our representative will help you with exit formalities and then bid you farewell.

-Activities as per tour including entrance fees

-Private transfers and transport between airport, hotel and sightseeing spots

For queries/bookings for this tour, pls email us at hello@crimsonasia.my .

For queries/bookings for this tour, pls email us at hello@crimsonasia.my . 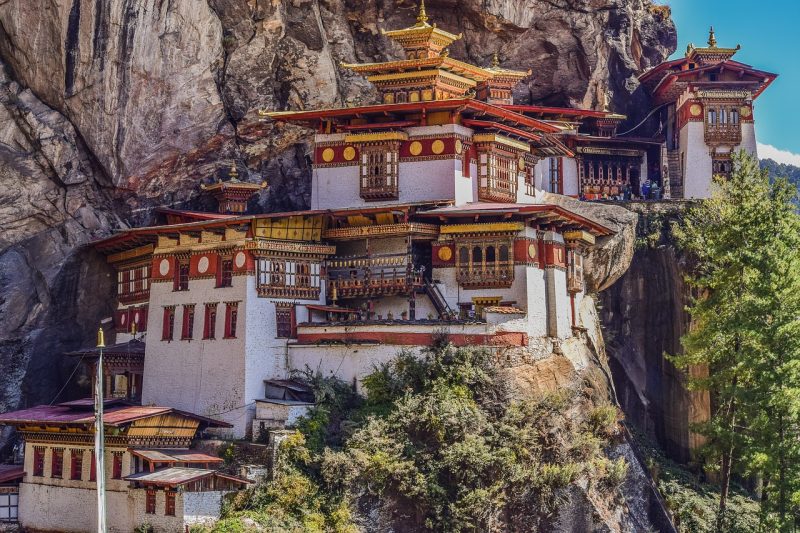 © 2019 Crimson Asia All Rights Reserved.
Back to top